One of the classes I taught this semester is Phy 3114, General Physics. This class is taken by all first-year students in Applied Biology, Applied Chemistry, and Food Science & Technology. There were 195 students in the class. I gave a two-hour lecture once a week in a large lecture hall. There was also a weekly two-hour "tutorial" session. The students were divided by major, so each tutorial session had only around 60 students. I didn't do the tutorials; other instructors led them. Once a week there was a five-hour lab session. We divided the class into eight groups of approximately 25. Each week we did a 1.25 hour lab with four of the groups. Over the term each student did four labs. 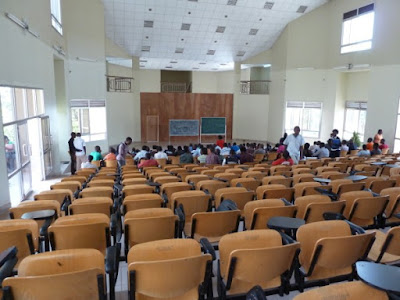 The lectures were held in an auditorium that seats around 400. Above is a picture I took of the room before the last class while students were still filing in. Typically the room ends up around half fill. Attendance was low on this day, however, perhaps since it was the last day of the term. I stand on the stage and write in large letters on the two small blackboards. The first half of the term there was only one blackboard in the room, which posed a bit of a challenge. I was happy when the second blackboard appeared. 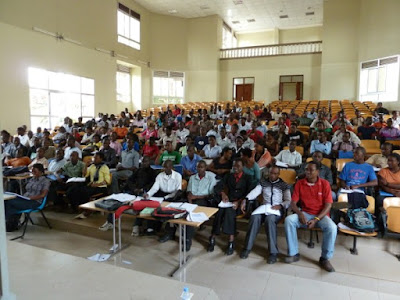 This picture was taken from the front of the classroom--i.e., onstage---right before I ended the last lecture. One of the blackboards is just visible on the left of the picture. I would guess that only 75% of the students were there that day. Usually the front part of the class is more densely packed.

Teaching General Physics was incredibly challenging. It is hard to teach 190 students. It is impossible to get to know so many students individually, so the class had more of an impersonal feel than I would have liked. Another instructor and I shared grading responsibilities, but grading still took an incredible amount of time. I am not looking forward to grading the finals.

There were other challenges, too. Most of the students do not have good English skills. This is not their fault. They simply don't have much experience learning in English. Rwanda technically switched from French to English instruction in high schools and higher education several years ago. But such a transformation does not happen overnight. My sense is that my general physics students have learned in high school in a mixture of Kinyarwanda, English, and French. They certainly haven't had a foreign instructor with an American accent before.

I am impressed with how the students seemed undeterred by this. By and large, they kept coming to class. There were a handful who consistently asked good and helpful questions. I think their comprehension improved over the eleven weeks, and I also think I got a little better at figuring out how to make myself understood. They never exactly laughed at my jokes. Humor is probably one of the hardest things to comprehend in an unfamiliar language. But I was able to get them to laugh with/at me, as I acted out physics scenarios, pushing on imaginary boxes, kicking things across the stage, throwing erasers, and so on. When I drew a stick figure of a lion (it was part of an analogy to explain surface tension) it led to much laughter and a smattering of applause.

My sense is that the students' preparation is uneven. Most have had quite a bit of mathematics---more than the typical U.S. student. But their problem-solving skills are not strong. I think students do a great deal of rote learning here. On the midterm I asked them to solve some problems they hadn't seen before. The students did not do well. I may have mis-calculated and made things too difficult. I suspect that many students had never been asked to do something like that on a test before.

Perhaps one of the most frustrating aspects of the course was that I felt there was just no way to convey to students the awesomeness and fun of science. In part this is because of the language barrier; it was just too difficult to explain certain things. But also the format of the course---almost 200 people in one room for just two hours ever week, needing to get through a large list of topics---leaves little opportunity for fun or exploration. I hope that at some time during their careers at KIST my General Physics students get a sense of how fun and interesting science can be.

dave
Reflections, ruminations, and observations from my time as a Fulbright Lecturer in Rwanda.